Locally known as a parc salvatge (wild park) or poblat salvatge (wild village), seven towers soaring over 100 feet high, innumerable bridges, shelters, walkways, stairwells, and, above all, a labyrinth over a mile long comprised the most extensive incarnation of Pujiula’s 45+ year labors. Created from branches found on-site, it was the world’s best jungle gym, the most unaffected open-air sanctuary, the most devilishly enjoyable maze, the “Sagrada Familia of Art Brut,” in an appropriate aesthetic and conceptual reference to one of Spain’s most recognizable architectural treasures, the Barcelona temple designed by Antoni Gaudí.

Pujiula’s creation of one of the most spectacular “outsider” art environments anywhere defied traditional community norms of aesthetics and function, yet enjoyment of his site by visitors ultimately became crucial to his continued efforts. 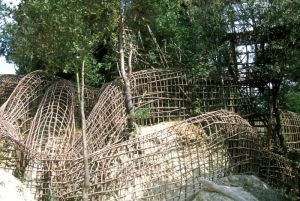 However, he had built on land that was not his own, and in 2002 he was forced to destroy and remove the entire construction. Undaunted by the demolition of that second iteration of the original environment, Pujiula moved to a nearby site, and this new version, elegant and extremely complex, featured steep climbs, numerous dead-ends, and trick walkways within the labyrinth. Also working in concrete and iron in order to increase the durability of his works and the immortality of his name, his construction once again became one of the largest and most idiosyncratic art environments known worldwide. 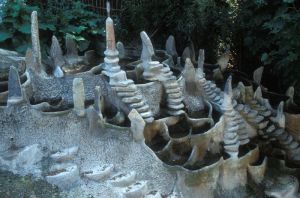 Nevertheless, in 2012 Pujiula was forced yet again to dismantle and burn most of the wooden components, and then, in 2013, the agency in charge of water demanded that he remove the concrete and steel components as well. Finally, thanks to a petition drive supported by thousands of supporters from around the globe, which was notably and significantly supported by members of the local community, his site finally became recognized as a local heritage site, and is now being supported by the county and the village.

In the meantime, Pujiula began working on two separate sites just slightly west of the fountain area. Most impressively, he hollowed out a labyrinthine cave nearby, ornamenting its cliff face with pictographs representing his life; his intent was that it would ultimately serve as the final resting place for his ashes.

I nominated Pujiula for the International Award for Public Art, and he progressed through the competition (unbeknownst to him);  in late June/early July 2015 he was flown to New Zealand by the international consortium that sponsors this award. As a finalist chosen from 125 exemplary projects worldwide, and representing all of Europe, including the Russian Federation, Pujiula’s 45-year construction of the labyrinths and cabins at Argelaguer received an award of special distinction at the honor ceremony, celebrating the tenacity of his efforts, the durability of his work, and the immortality of his name.

His work had become the very symbol of the village of Argelaguer, while at the same time it has been accorded increasing importance from sources all over the world. Once the aim of Pujiula’s private labors became intertwined with the public’s response, there was no going back. “I always did this as a hobby,” he said, “but the fact that people found it so important also encouraged me to keep moving forward.”

On June 2, 2016, in the midst of an intensive building effort in which he was constructing a third and projected fourth tower above the area where he had established his “museum,” Pujiula suddenly died from a heart attack while on site. As of this writing the site is generally protected, but it is as yet unclear what will happen to the new wooden towers, stretching almost 40 meters into the sky. 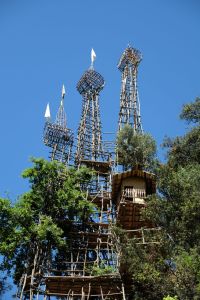 As he created one of the most unique, most monumental, and most compelling art environments in the world, Josep Pujiula i Vila’s intensity and creativity made him, in my eyes at least, an icon of the irrepressible artist. And as he and his work have amplified our artistic understanding as well as challenged our social standards, he has, simultaneously subversively and humorously, taught his supporters and his neighbors to embrace and to celebrate the wondrous, witty, rebellious, and creative marvel of his works.