Jo Farb Hernandez is Director and Chief Curator Emerita of SPACES – the nonprofit archives Saving and Preserving Arts and Cultural Environments, after having served as its Director from 2006-2019. 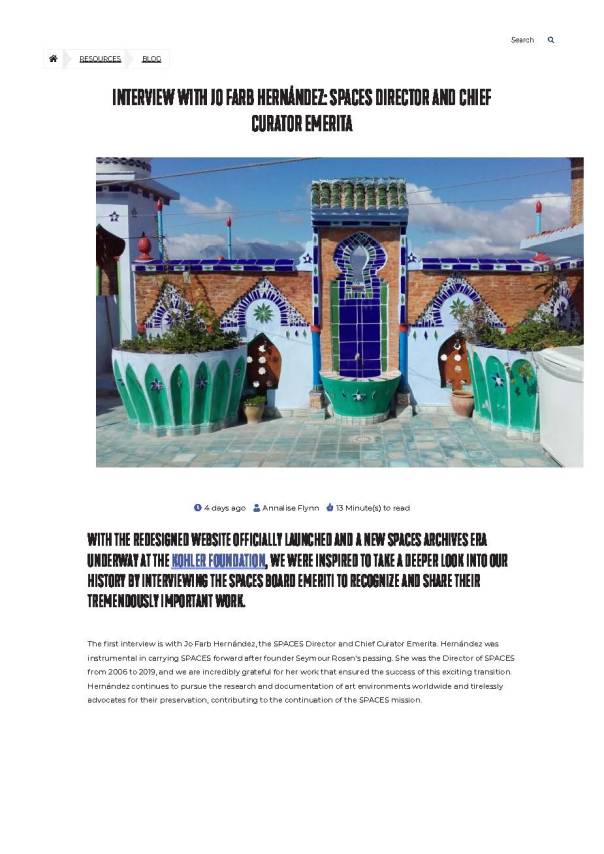 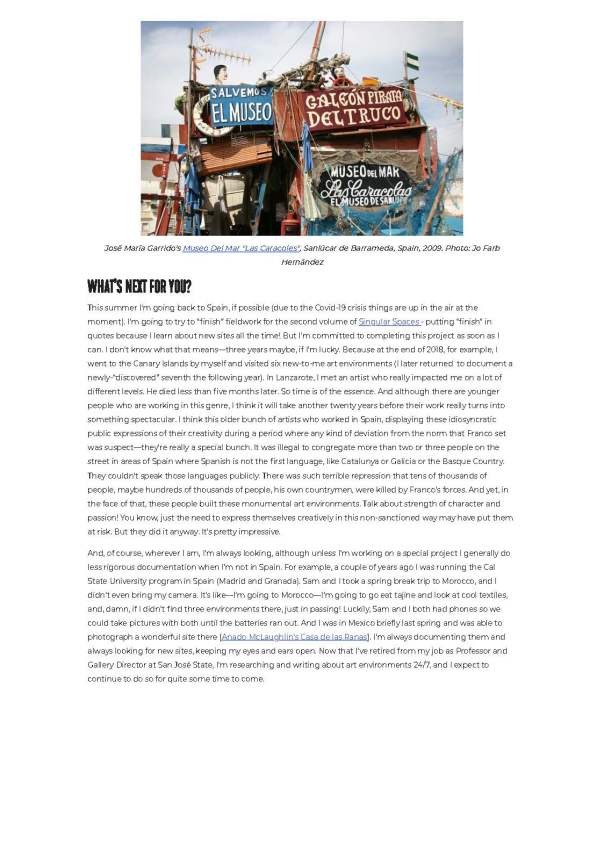 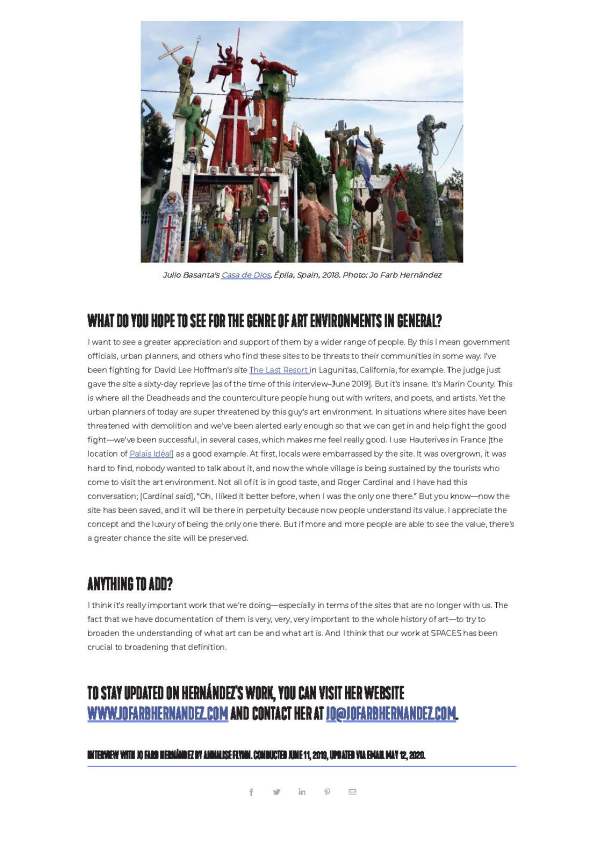 Posted by National Center for Preservation Training and Technology NCPTT, 2015:

Scholarly research into art environments, which provides the opportunity for comprehensive, non-biased, and in-depth interpretation and analysis, is essential prior to initiating any professional plan for conservation and preservation. Taking a broad view of the worldwide phenomenon of these invented spaces, Jo Farb Hernández will explore the range of curatorial and documentation parameters essential for success, based on her groundbreaking survey of art environments created by self-taught artists from across the Spanish mainland, and informed by her work with SPACES (Saving and Preserving Arts and Cultural Environments), the world’s most important archives of these monumental sites. Hernández reminds us that due to the complexity of these sites, curators who have done the research must insist on framing the parameters of the way this art is described, defined, and interpreted, and must not let the facile descriptions or simplistic interpretations of the media override the ability to provide a professional analysis. Detailed case studies must be contextualized with historical and theoretical references to a broad range of interlocking fields, including art, art history, anthropology, vernacular architecture, area studies, and folklore, because so doing provides an opportunity for viewing art environments through a variety of lenses and collaborating in a trans-disciplinary manner to approach a more thorough and complete understanding of these multi-leveled and multi-coded displays. Hernández’s project Singular Spaces: From the Eccentric to the Extraordinary in Spanish Art Environments, introduces and examines forty-five artists and their intriguing and idiosyncratic sculptures, gardens, and buildings. Most of these had never been previously published, let alone professionally documented. Her powerpoint presentation will feature her photographs of many of the noteworthy Spanish sites, along with comprehensive information about the associated site plans and inventories that augment this project, making her encyclopedic study a model for the field. While each art environment is unique and idiosyncratic, what most do have in common is that many face similar existential predicaments in terms of community response and governmental pressure. It cannot be denied that the fame accorded Catalan architect Antoni Gaudí’s works has impacted general response to other non-standard constructions within Spain, for example. However, cognizance of his works has not necessarily been associated with the willingness of local building inspectors, municipal councils, or urban planning committees to bend regulations inscribed in local property ordinances or enshrined in civic improvement strategies in order to preserve these extravagant sites and allow them to flourish. It is up to us, then, as curators who have photographed these sites, documented the work, interviewed the artists—and no doubt taken their time away from their work—that we be prepared to support and forcefully advocate for their preservation in whatever way is needed. Comprehensive research and rigorous documentation provides us the tools and the scholarly veracity to do so with force and conviction.

As the first nonprofit public benefit organization created with a national—and later, an international—focus on art environments and self-taught artistic activity, SPACES’s mission is to

While the need for an organization to document and mobilize support for art environments was identified as early as the late 1950s when a group of concerned citizens fought to save Sam Rodia’s Towers in the Watts section of Los Angeles, SPACES was not formally organized until 1969 and not incorporated as a non-profit organization until 1978. Founding Director Seymour Rosen (1935-2006), noted photographer and community activist, realized that the “extemporaneous individual acts of people declaring their existence” were universal, but, as so many of them were ephemeral, they were also almost universally unrecorded in a consistent manner. SPACES was formed to fill that gap; his tens of thousands of photographs of such artwork became the basis for the archives. Among Rosen’s most important contributions was the designation of California State Landmark #939 in 1978, an innovative and open-ended approach that defined a statewide historic district ultimately including ten unique and widely-dispersed environment sites. Although not alone, Seymour Rosen truly can be credited as one of the very few people who defined and clarified an entire genre of art, and through this he has indubitably—and perpetually—changed our cultural landscape.

Under the leadership of Jo Farb Hernández, widely-known curator and author in the fields of self-taught and contemporary arts, SPACES’ offices have moved to northern California. Re-organizing and re-energizing the organizational infrastructure, Hernández oversaw the continuation and expansion of SPACES’s regular programming as well as developed ambitious new plans for the future.

In 2019 she was honored with the title of Director/Chief Curator Emerita at SPACES, after having guided the transition and having moved the archives to the Kohler Foundation, Inc., in Sheboygan, Wisconsin.

SPACES views art creation in a holistic way, realizing that extemporaneous individual acts of aesthetic and cultural manifestation are not only universal, but also almost universally unrecorded in a consistent manner. To that end, SPACES Archives include documentation on such themes as decorated motor vehicles, demonstrations, gardens, graffiti, murals, neon, parades, signage, tattoos, yard art, and more.

Art environments often challenge aesthetic and conceptual community values at the same time that they are beset by environmental degradations; this combination can be fatal for their ongoing stability and preservation. Numerous sites have suffered partial or total destruction over the years; the creation of personal worlds by non-academic builders, passionately recycling our society’s discards in an effort to publicly proclaim love of country, religion, or other personal convictions, retell local histories or tales, or just “make something big,” as Sam Rodia, creator of the Watts Towers, is said to have claimed, does not bring with it a guarantee of eternal existence.

Because art environments cannot be hermetically stored, they need continued vigilance and a concerted effort from local community members—backed up by art and preservation professionals internationally—to ensure their survival. SPACES helps to advocate for preservation by providing support and materials to local communities to help them save the endangered monuments in their areas, and, in many instances, has also helped to inspire the creation of other local nonprofit organizations with specific and targeted objectives.

SPACES serves as an international resource to state arts and humanities councils, museums, universities, public radio and television stations, state historic preservation offices, and grass roots organizations in their local and regional efforts to document, research, and preserve the phenomena of art environments: hundreds of researchers request information annually from SPACES’ archival collections. SPACES staff have developed materials to help local communities answer the appropriate questions for art historical, humanistic, sociological, and preservation concerns; have written feature articles on the subject for national and international magazines and journals; have spoken at national and international conferences of arts organizations, folklorists, preservationists and museum personnel; have guest-curated exhibitions for museum and university galleries; and have supplied documentation for films, videos, articles, books, and other dissemination projects by independent researchers and scholars.

The historical depth and geographic breadth of the materials included in SPACES archives form an unsurpassed resource for the field. 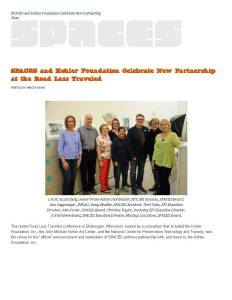